The first form of the verb is used as present tenses(simple) in fact this tense does not describe the action that is taking place now/at present. This tense is used to describe habitual or usual acts or general and permanent statements.

In this tense, third-person singular ends in “s” or “es”.

All these examples describe habitual or usual actions and general truths. 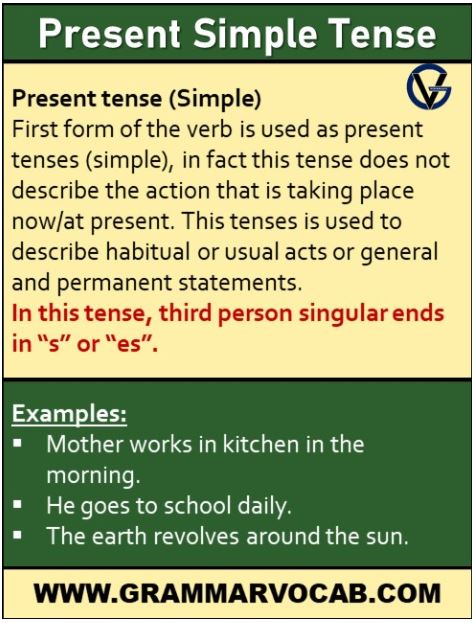 This tense describes the action that is taking place Now/ At present.

It is made from the present of “to be” with the “ing” form of the verb.

Most verbs of sense feeling or perception are generally not used in the continuous form, useless, of course, they are used in some special sense. These verbs describe actions that happen automatically or state beyond human control.

A list of some of these verbs is given below:

Present perfect English tense tells us about an act that is co. Pelted by now. It does not tell us when this completed act happened. It is only concerned with its present completed state and its relation with now.

The present perfect tense is made by prefixing has or have to the third form of the verb.

Apart from the two adverbs “already “and “not yet” which are normally used with the present perfect tense, the word “since” and “for “are also generally used with this tense. “For” is used for “a given length of time tills now”. 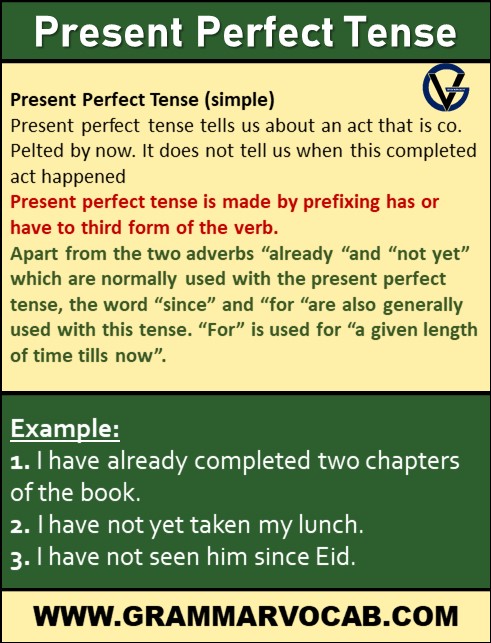 Present perfect continuous is made by the use of has or have as in the case of present perfect (simple), followed by “been” and “ing” form of the main verb.

Past tense is made by using the second form of the verb. The word “ago’ is associated with this tense in the same way that “since” and “for” are with the present perfect. The word “ago’ points to the date or period of time measured back from the present.

Certain verbs are not used in the past continuous form. They are the same verbs that have been discussed in the case of present continues to form some verbs of sense, feeling, and perception. 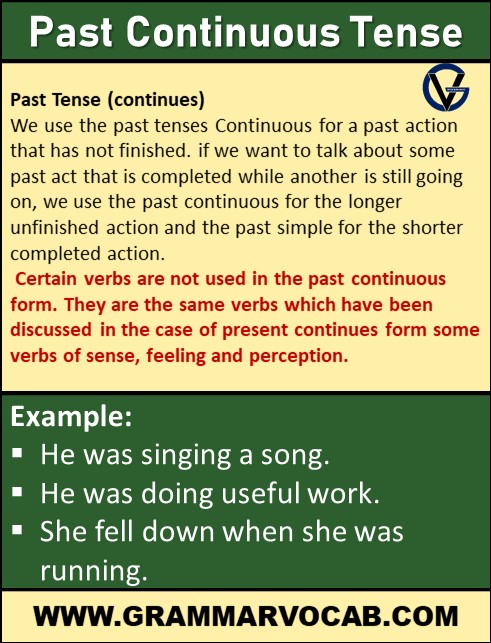 Past perfect tense describes an action completed before the last moment we are talking about. This tense bears the same relation to the past time as the present perfect tense does to now.

This tense is often associated with time clauses and is commonly used in the Reported speech. The past perfect tense is made by prefixing “had” to the third form of the verb. 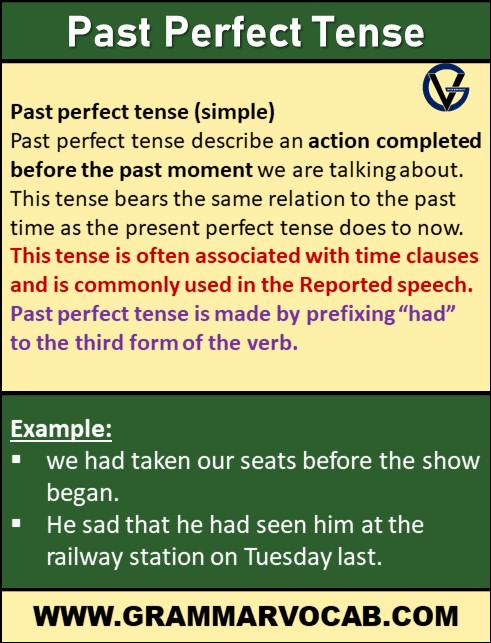 Past perfect continuous tense is used when we wish to describe an action that was not completed by a certain date or time in the past.

This tense is made by the use of had as in the past perfect simple followed by “been” and “ing” form of the main verb.

The future tense is used to describe an act that is going to happen in the future.

There are a number of ways to make the future tense.

Shall is used with first-person singular and plural and will with second and third person. It is used vice versa if the act has to be emphasized.

Generally, the use of shall, will, or going to does not make any difference in the meaning of a sentence. Sometimes. However, it does. Going to is normally used when the speaker intends the action or feels that the action is certain to happen.

Present continuous tense is used to announce a future event which is already fixed or arranged. It is especially common with the verbs of movement. 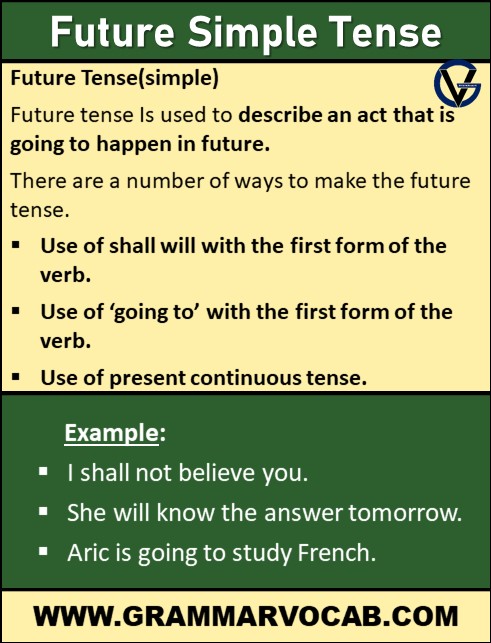 This tense is used to describe an action in progress at some future moment.

This tense is made by using “shall be” “will be” followed by the “ing” form of the verb. 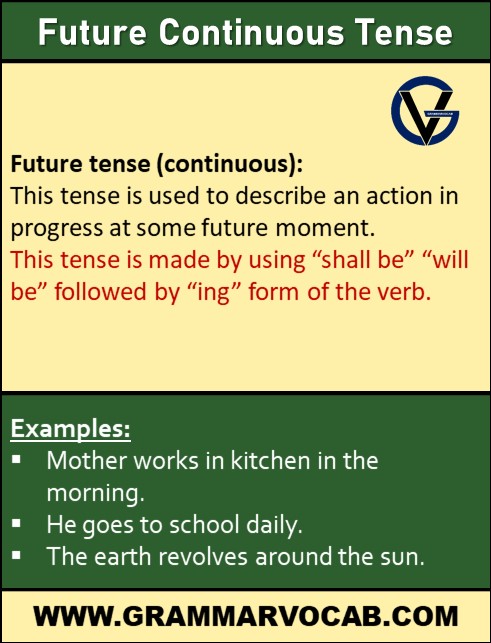 Future Perfect tense tells us about an activity that will be completed by a certain future date.

It is made by using “shall have” “will have” followed by the third form of the verb.

There is also a Future perfect continuous Tense but it is not often used.

By next year he will have been working in this factory for five years. 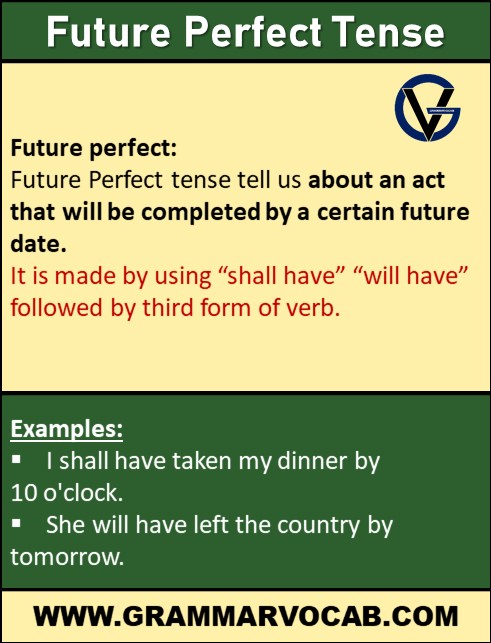 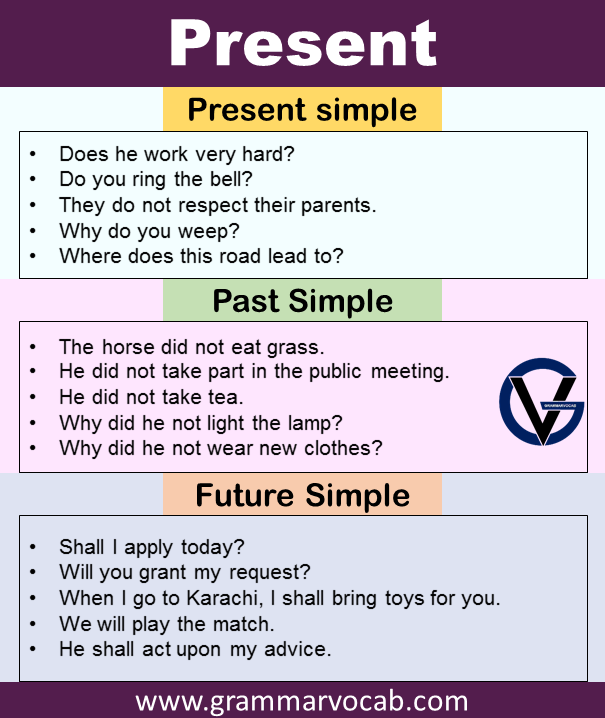 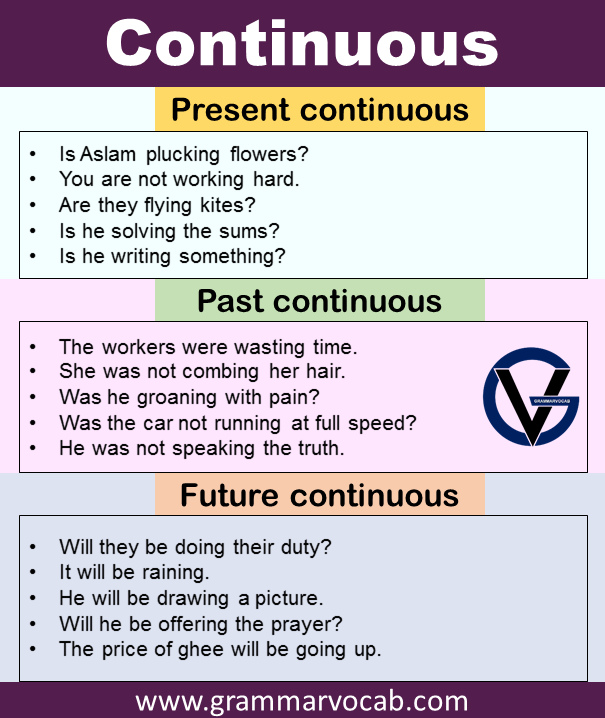 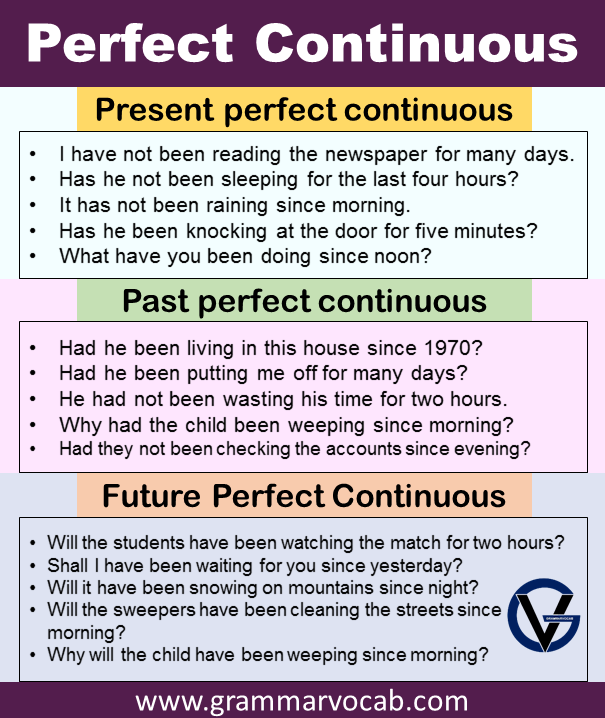 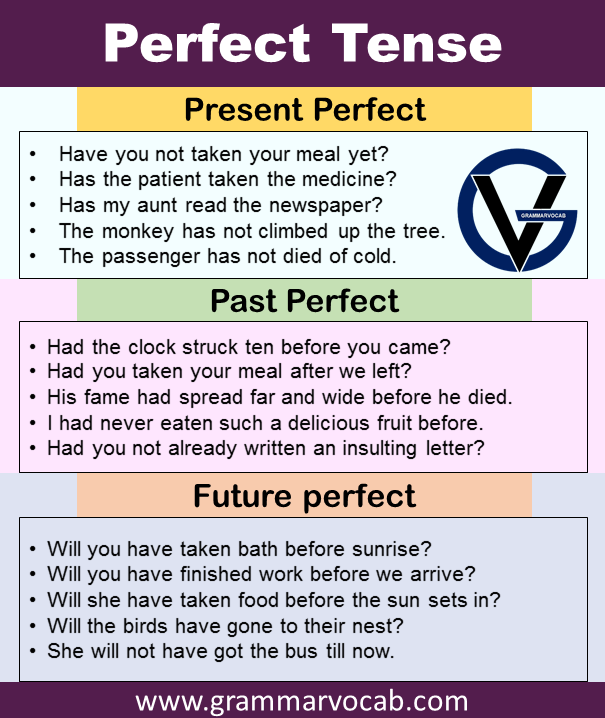 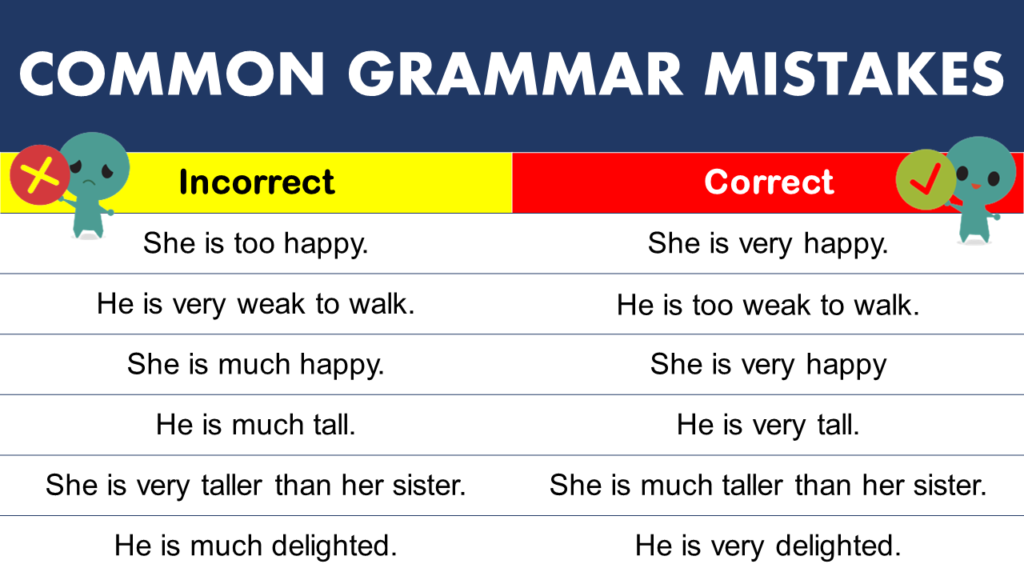 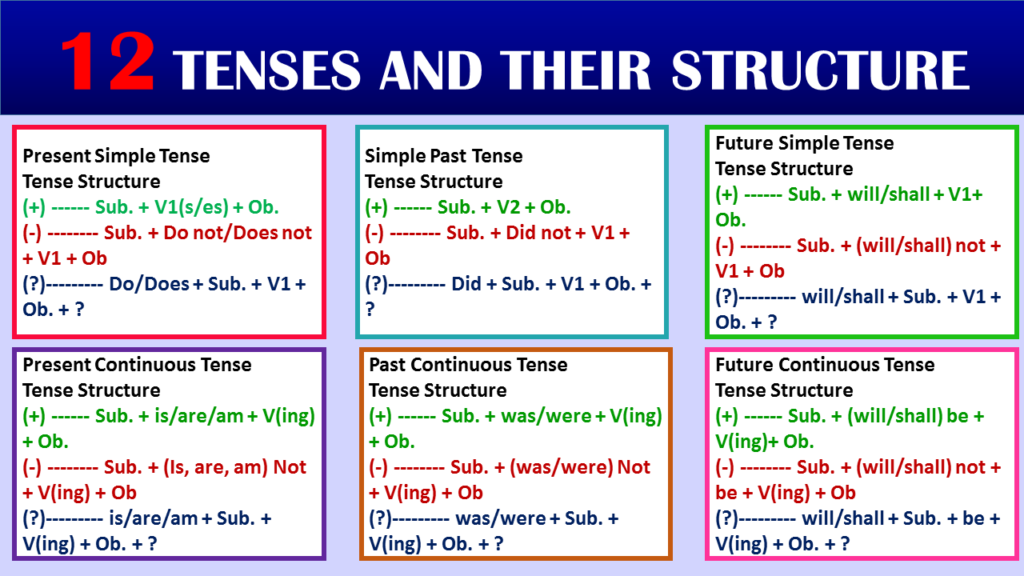 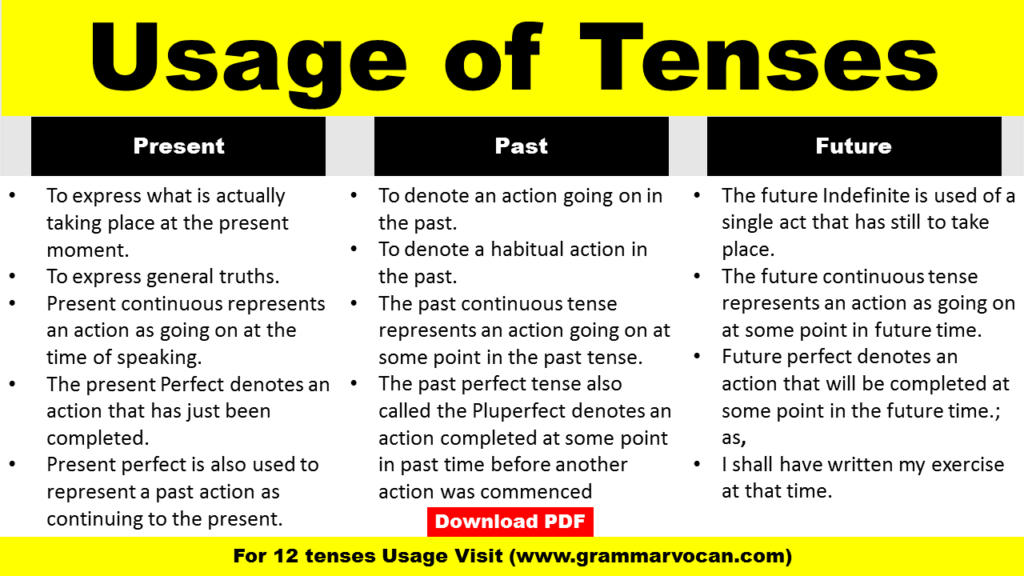