Punctuation is a set of markings or symbols that we need to clearly explain the meaning of our sentences and to maintain the text flowing smoothly. It indicates when we should take a break, divides concepts, indicates when a phrase is quoting someone else’s words and performs one of several important tasks.

There are fourteen major punctuation marks in the English language, which are listed below.

End punctuation signals the end of a sentence, as a capital letter signals the beginning.

There are three end marks.

The full stop / The period

The full stop conveys the longest pause in a passage and is used:

To make the end of a declarative sentence, a mild command, or an indirect question.

To make the end of some abbreviations and initial:

In general, abbreviations of governmental and international agencies do not take periods.

The full stop is optional if the contraction includes the final letter of the word.

A comma or other mark of punctuation may follow the period after an abbreviation, but at the end of a sentence, only one period is used.

Three continuous full stop/ periods are placed to show the omission of some words or incompletion of a passage.  The fourth full stop is placed to mark the end of the sentence.

Full stop is also used to separate hours and minutes. 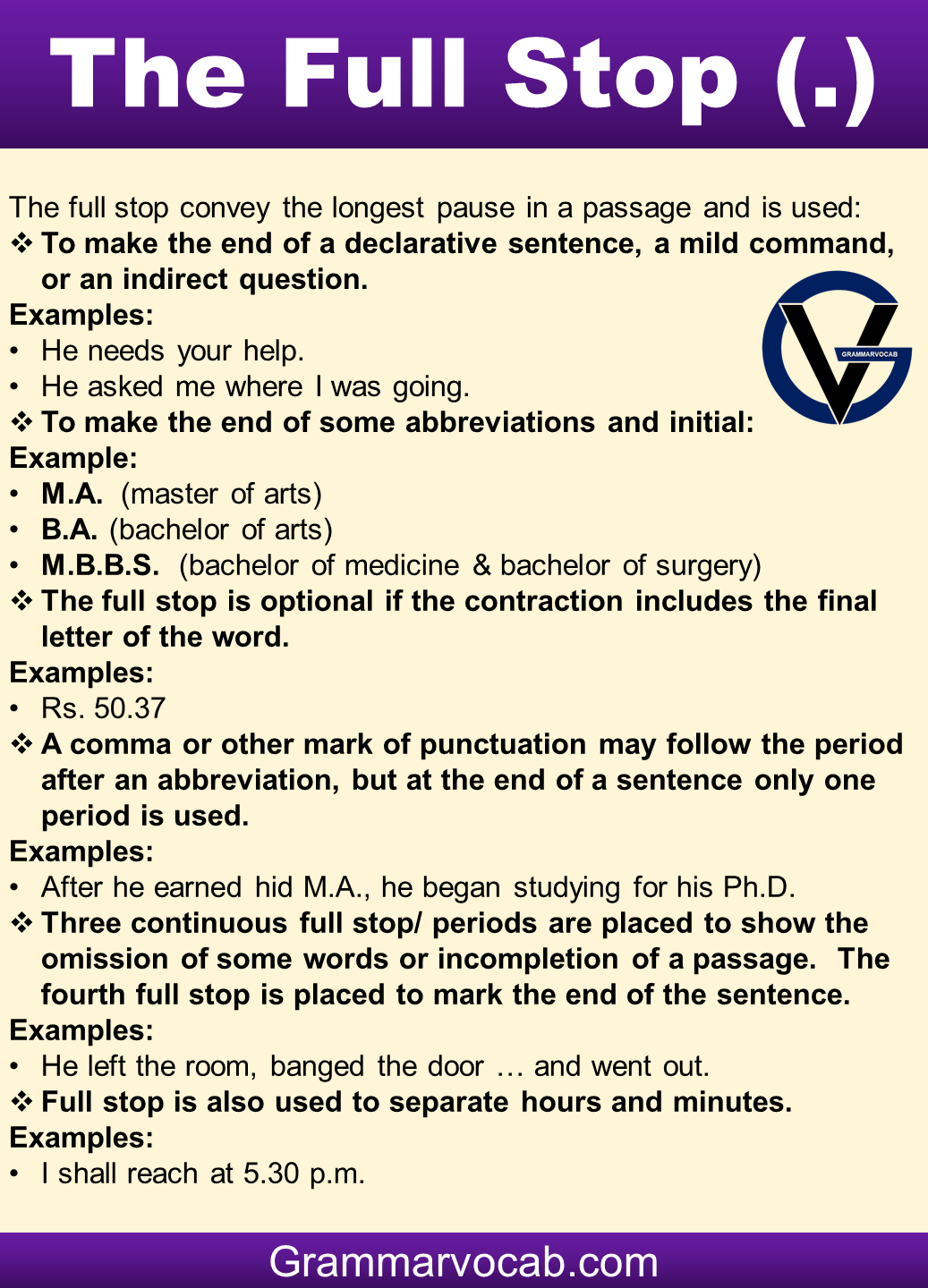 The mark of interrogation

The question mark is used after a direct question.

The question mark is used within parentheses to indicate that the date or other statement is doubtful.

The question mark may follow separate questions within a single interrogative sentence.

Do not use a question mark at the end of an indirect question.

He asked me what I was doing. (Correct)

The question mark is used in polite requests.

Use of Question Mark in A Sentence 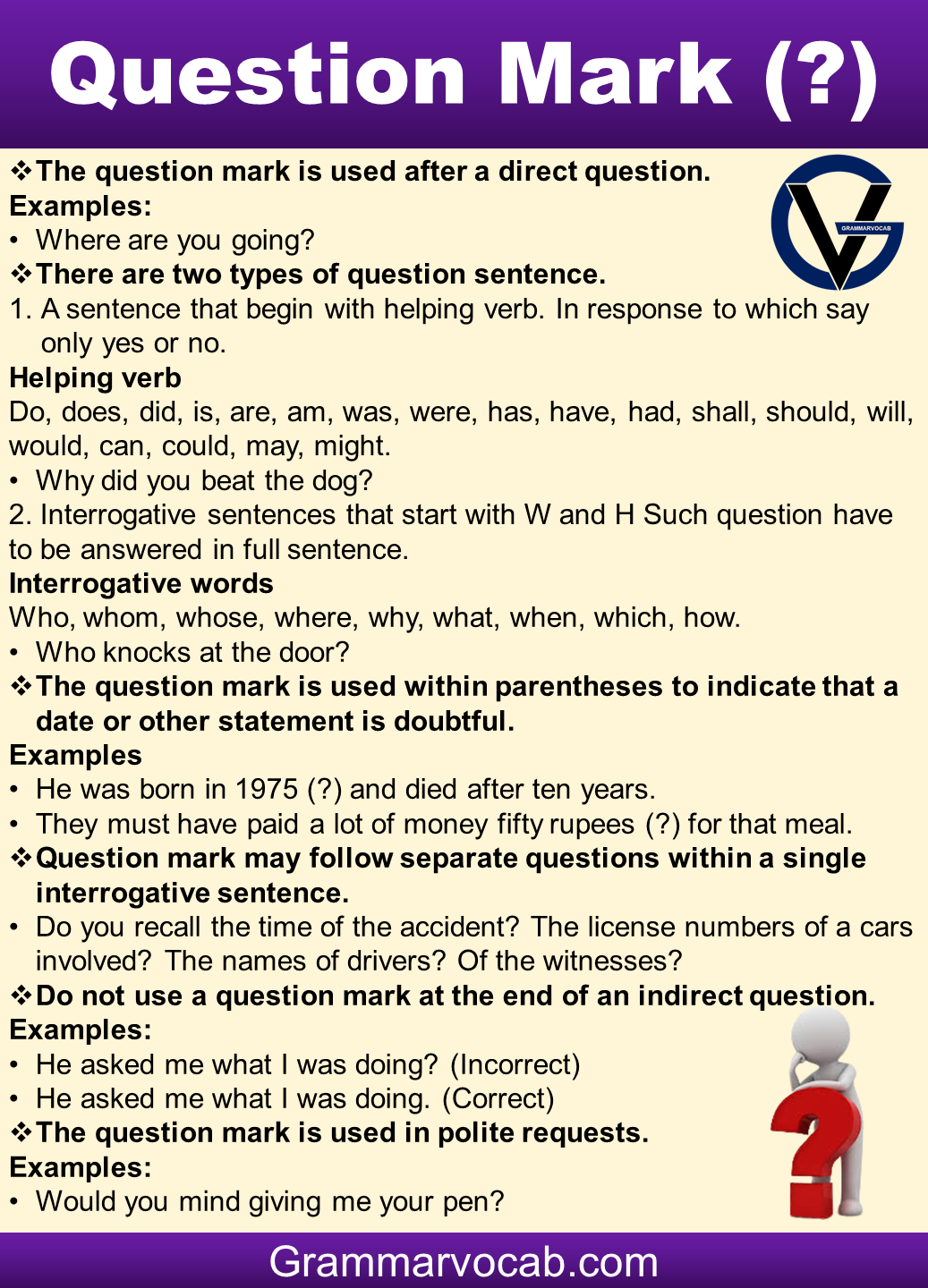 The exclamation mark is used afterwords, phrases, and sentences expressing some strong emotions or sudden feelings of the mind.

The comma is the shortest pause and is used within a sentence to separate or set off words and groups of words.

The comma is used to mark off words used in addressing a person.

When you mention a person’s title after his or her name or the name after the title.

The comma is used to make off a series of words of the same class like nouns, pronouns, adjectives, adverbs, and verbs.

The comma is used between pair of words connected by “and”.

The comma is used to indicate the omission of a word or words in a sentence.

The comma is used between the day and year is a date.

The comma is used after and before certain words. Some of the words are: however, at last, of course, well, therefore, indeed, meanwhile, to sum up, first, no doubt, in fact, in short, after all, to say the last, to tell the truth, all the same, on the whole, finally, for instance, etc.

The comma is used to separate the reported speech from the reporting verb in direct speech.

The comma is used after a negative and affirmative adverb (no or yes) that begins a sentence.

The comma is used to separate an adverbial clause beginning with if, when, where, unless, until, after, before, since, though, because, etc, from the principal clause.

The comma is used to mark off or separate one abbreviation from another.

The comma is usually placed after the complimentary close.

The comma is placed after a participle phrase, a simple infinitive or an infinitive phrase that introduces a sentence.

NOTE: Do not place a comma after an infinitive that functions as the subject of the sentence.

The comma is placed to set off a phrase of contrast at the end of a sentence.

The comma is used to separate a declarative clause from an interrogative clause that follows it.

The commas are used to separate sets of three digits in numbers one thousand and greater.

Use a comma before a conjunction (and, for, but, or, nor, so, yet) linking two independent clauses. .

Do not use a comma before a conjunction that links a pair of words or phrases.

Do not place a comma before coordinate conjunction that connects two subordinate clauses.

The comma is used to separate a long subject, coming at the beginning of a sentence, from its verb.

The comma is used to mark off a clause beginning with Relative Pronoun or Relative Adverbs (who, which, whom, whose, that, etc.) when they explain or add to the meaning of a Noun or a Pronoun that has gone before.

When two figures come together in a sentence, the comma is placed to separate them.

The following will report at 9.30 sharp: Aslam, Akram, Zeeshan, and, Arslan.

We shall go to Smiths, Boots, Woolworths, and Marks and Spencer. 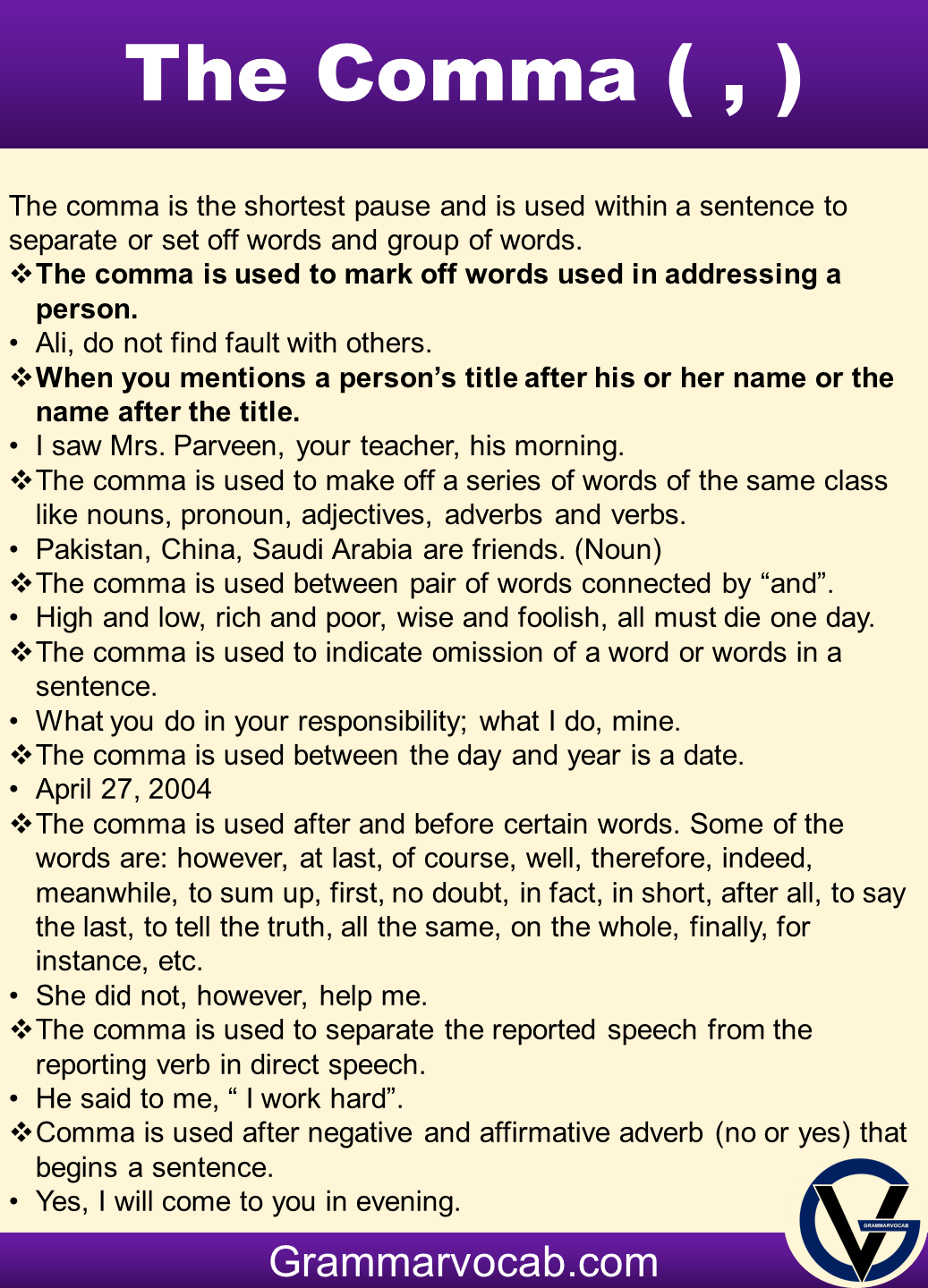 The semi colon is a longer pause than the comma.

To mark off coordinate clauses connected by the following conjunctions.

Otherwise, therefore, so, then, for, yet, still, thus, however, furthermore, moreover, indeed, also, hence, else, but, nevertheless, consequently, accordingly, etc.

Sometimes, the semi colons are used in a sentence which is complete but does not have conjunction.

She came; she saw; she went away.

He looked at it; he hesitated; he jumped.

The semi colons are used to separate a number of loosely connected co-ordinate clauses. For example; 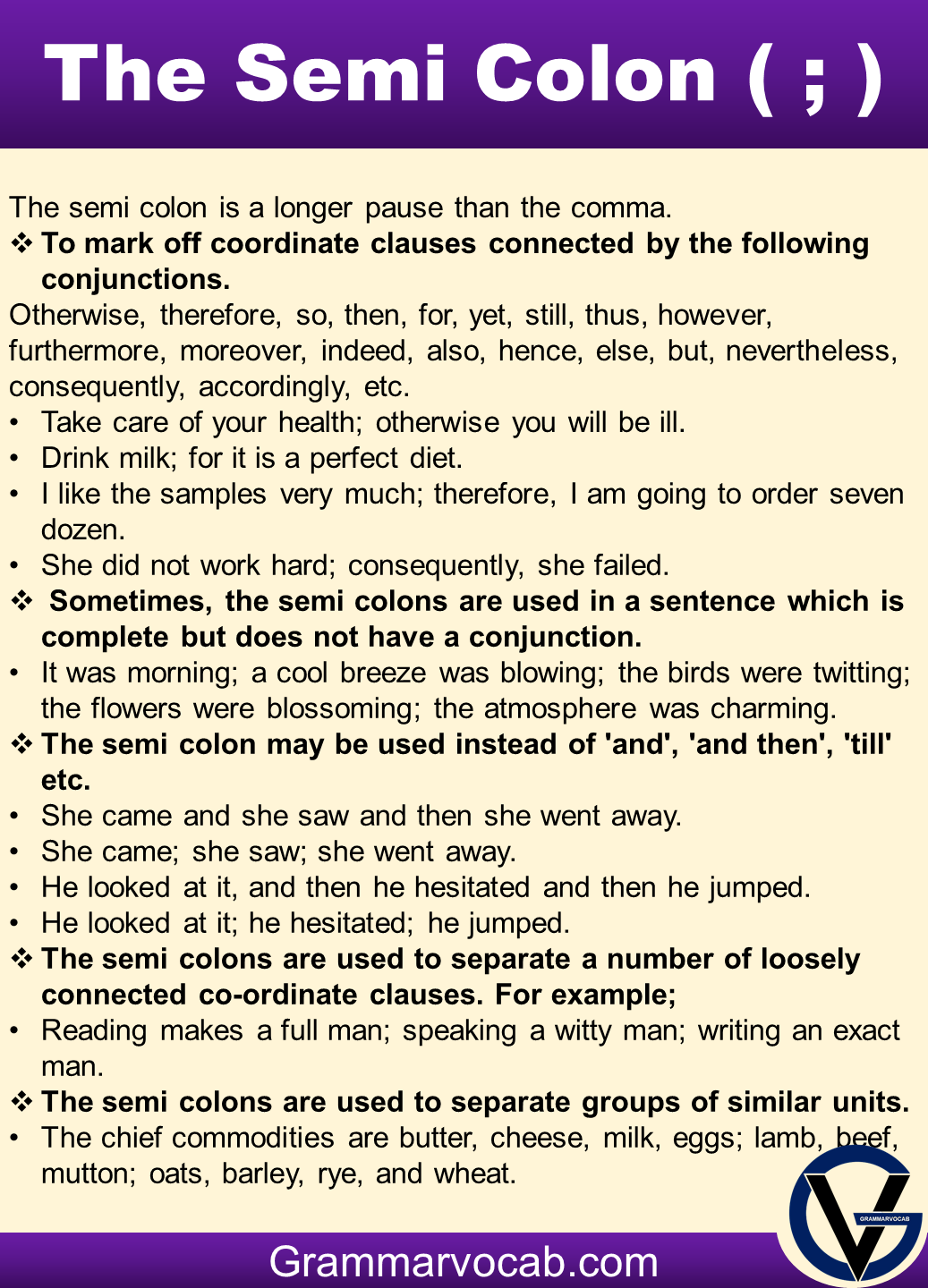 The colon is used to represent even longer pause than the semi colon.

The colon is used to introduce a quotation.

The colon is placed before a list that appears at the end of a sentence.

In this sentence colon is used n lace of ‘because’

I refused the offer: I do not wish to go there.

Speech is silver: silence is gold.

The colon is used to introduce an explanation of some fact which has been mentioned before.

The colon is used statements or sentences grammatically independent but closely related in sense.

The colon is used to introduce some examples.

The colon is used to separate hours from minutes when the time of day is shown in numerals.

The colon is used to indicate shares or proportions (ratios).

The colon is not followed by a capital letter except a quotation is given.

The colon is used to mark off the name of an author from the name of the book he has written. 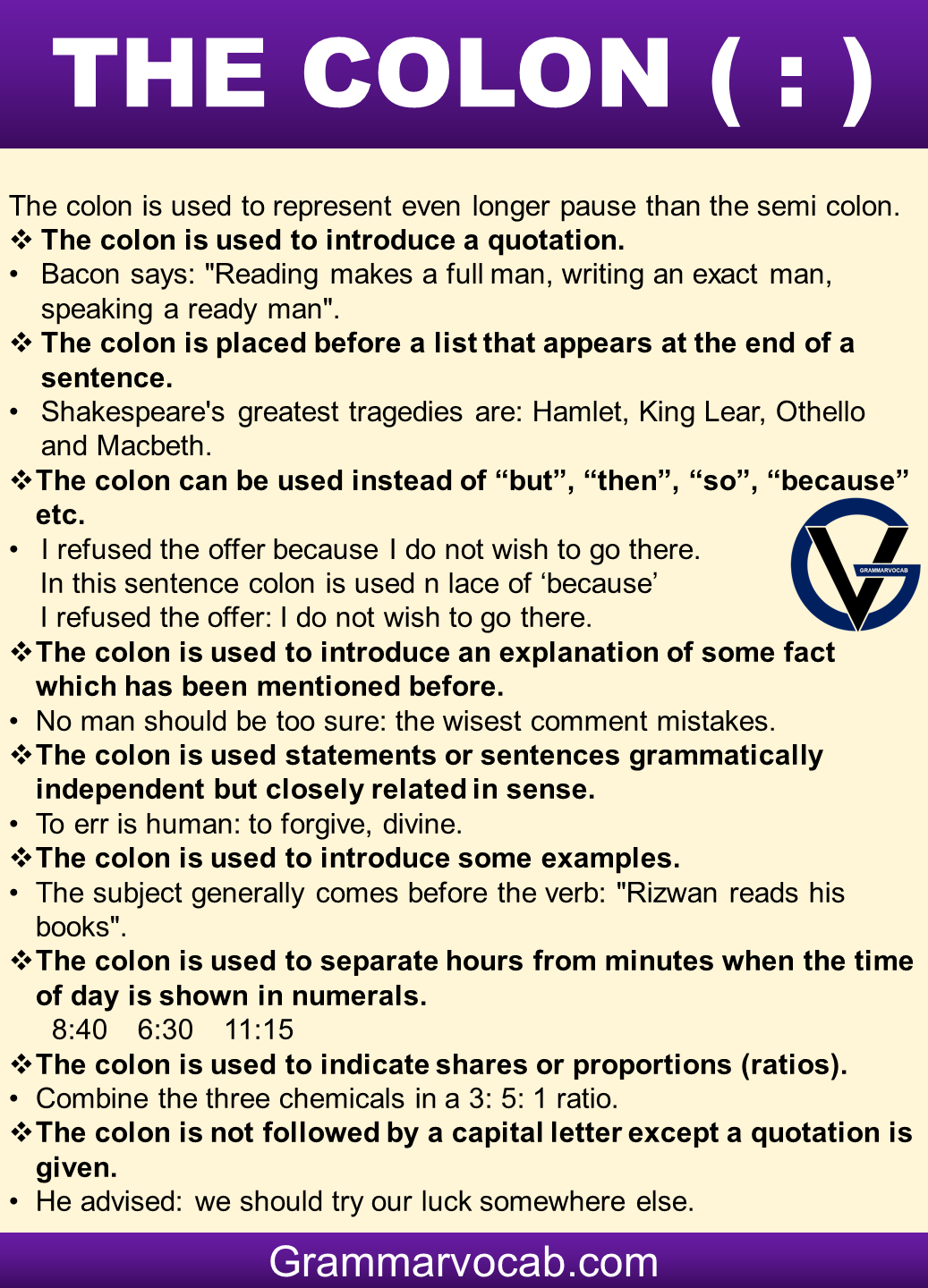 The quotation marks are used to report the exact words of the speaker.

The inverted commas are used for the title of a book, essay, poem, etc.

Shakespear speak of ‘quite desperation’ and what does he mean by this phrase?”

The dash is used to indicate a sudden stop or change of thought.

The dash is used before and after the explanatory words.

The dash is used before and after an enumeration.

The dash is used to indicate the intentional omission of some word or name.

The dash is used to indicate hesitation. 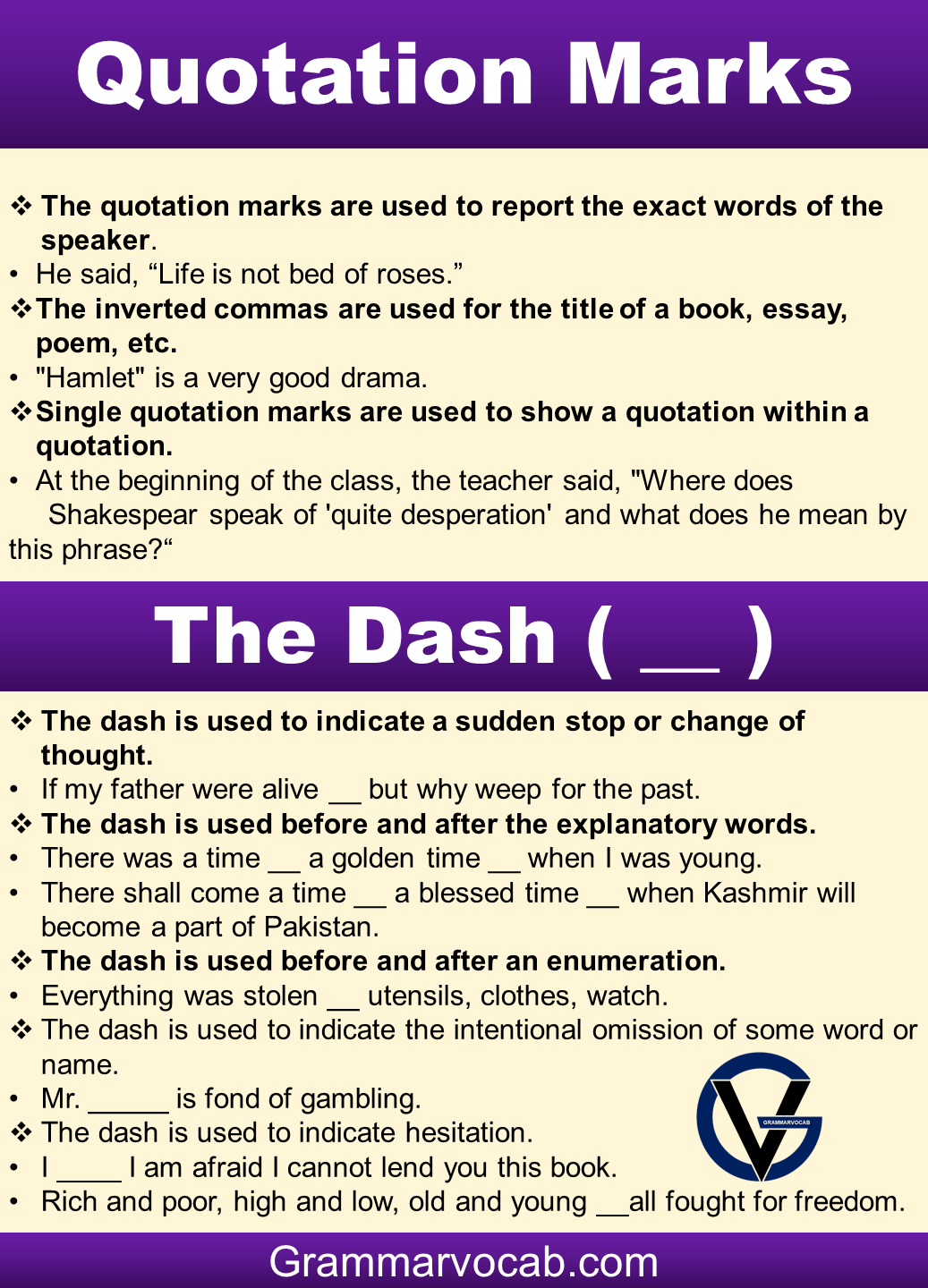 The hyphen is used to connect the parts of a compound word.

The hyphen is used to break a word at the end of a line.

If the figures more than twenty and less than hundred are written in words, the hyphen is placed between them.

Here is a short list of some words that need hyphens.

Do not hyphen the following.

Hyphens are used to separate syllables in words.

Note: Please remember that each syllable in English word must contain at least one vowel. If none of the five regular vowels ( a, e, i, o, u ) is present, count ‘y’ as a vowel.

Hyphens are used to separate the words in the written form of a fraction. 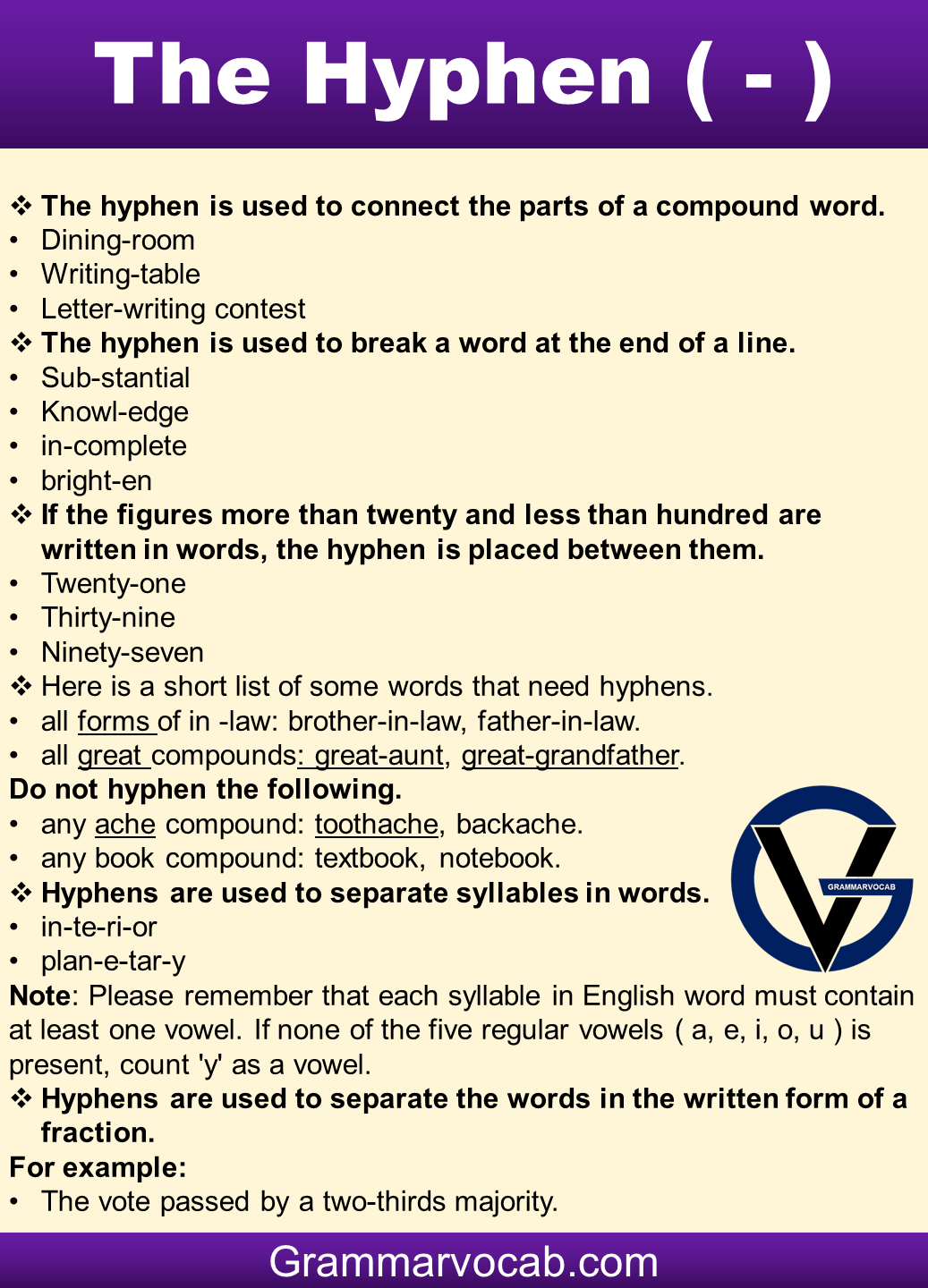 To form the possessive of singular nouns and abbreviations of singular items, use an apostrophe plus s:

To form the possessive of plural nouns not ending in s, add an apostrophe plus s:

To indicate that two or more persons own something jointly, add an apostrophe and s to the last of the nouns.

To indicate that two or more persons own two or more things separately, use the apostrophe and s with all the nouns.

To form the possessive with singular compound nouns, add an apostrophe and s to the last word.

To form the possessive of certain indefinite pronouns, add an apostrophe and s.

Note: With indefinite pronouns that do not take the apostrophe, form the possessive with ‘of’:

Use an apostrophe and s when necessary, in common phrase of time and measurement.

Use an apostrophe and s to form the plural of figures, letters and abbreviations.

Use an apostrophe to mark the omission of a letter or letters in a contraction.

Use apostrophe to mark the omission of numbers in dates. For example,

The apostrophe is placed after final‘s’ in a word when it is a plural noun. 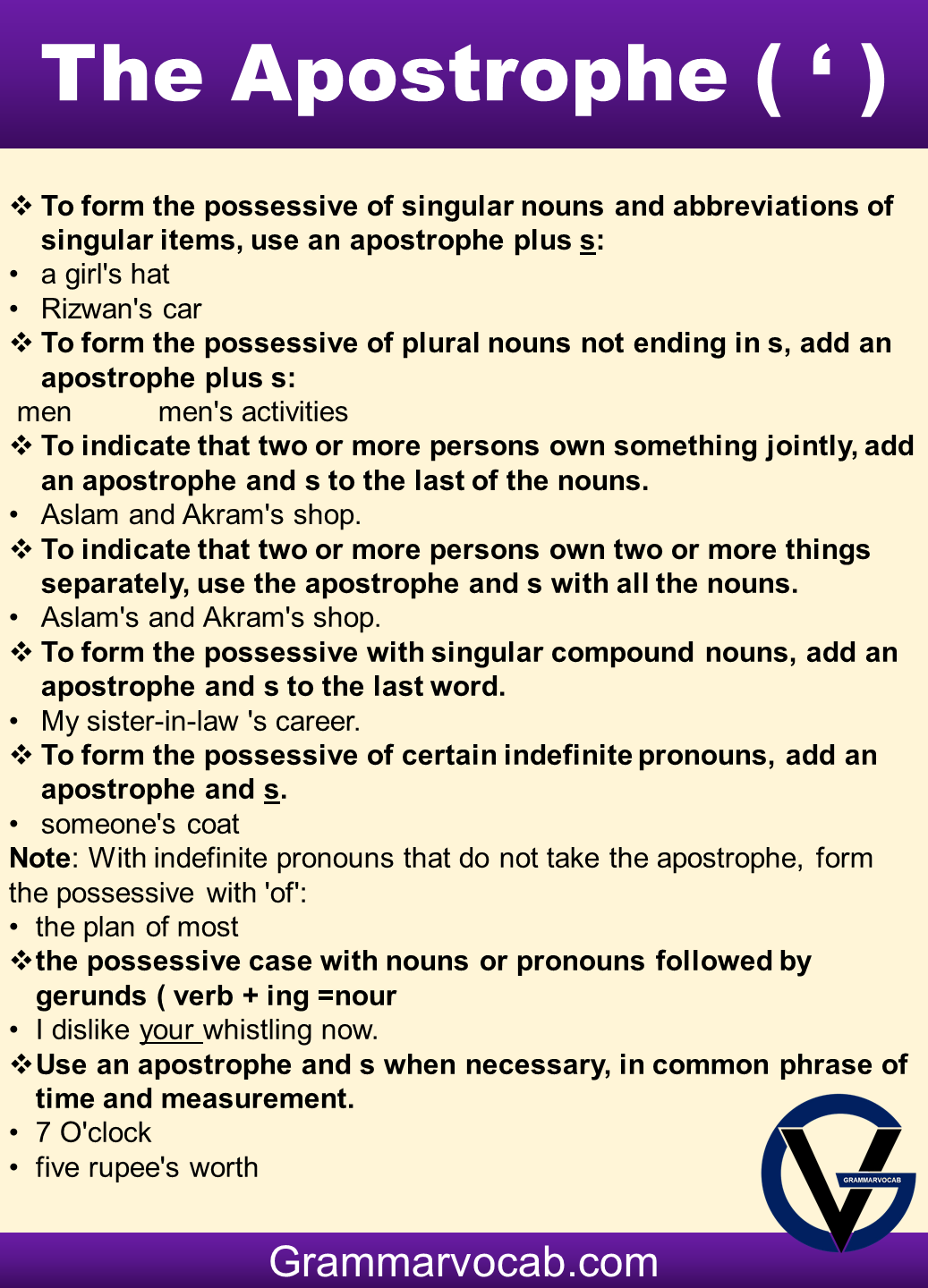 Brackets is also used for reference.

Brackets is also used for reference letters and numbers e.g.

One of the selectmen supports the proposed change in traffic patterns for three reasons: (1) more customers would be attracted to the shopping area, (2) the hospital zone would become quieter, and (3) fire engines would be able to move more quickly than they now can.

Brackets are also used for synonyms 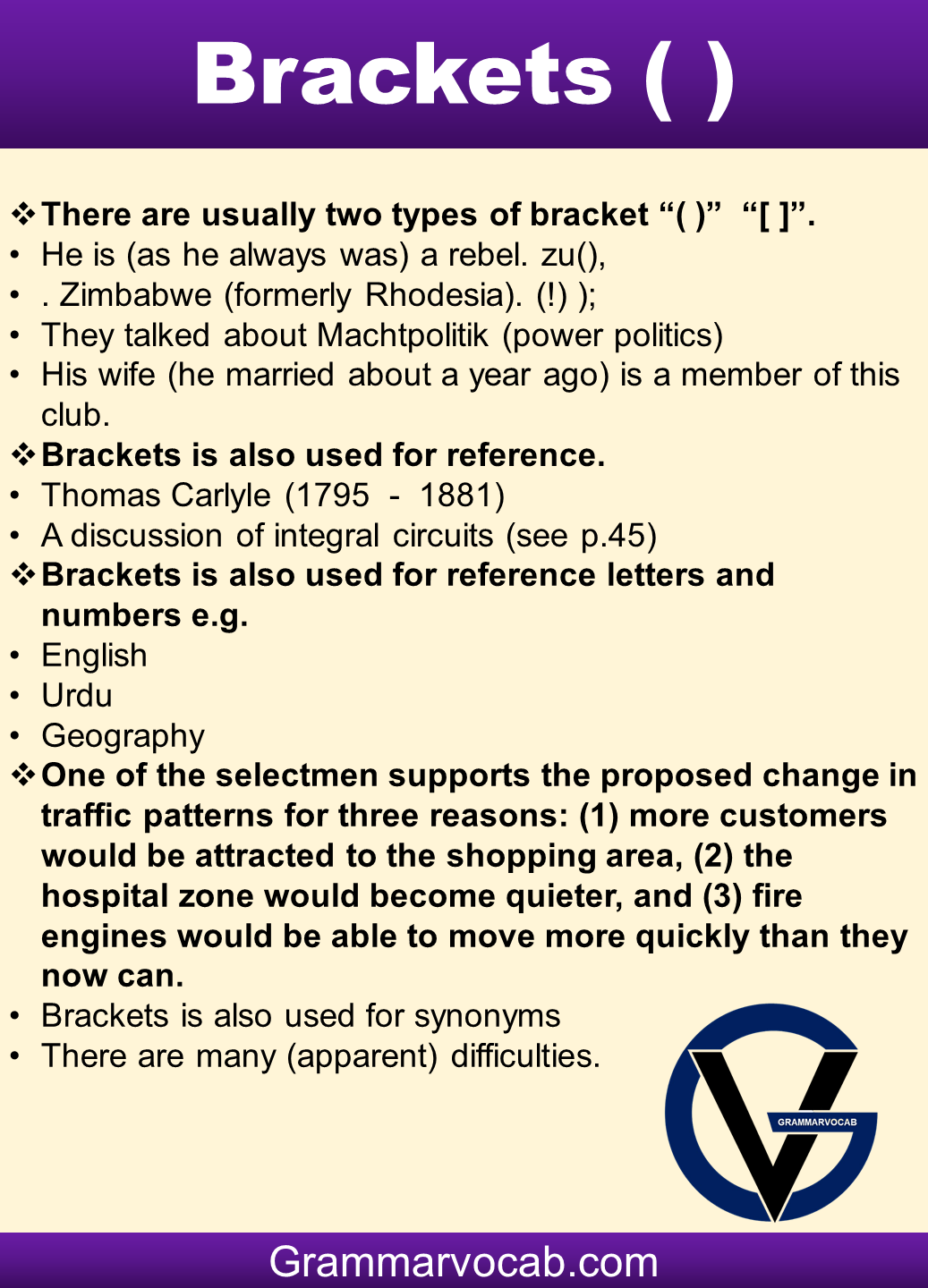 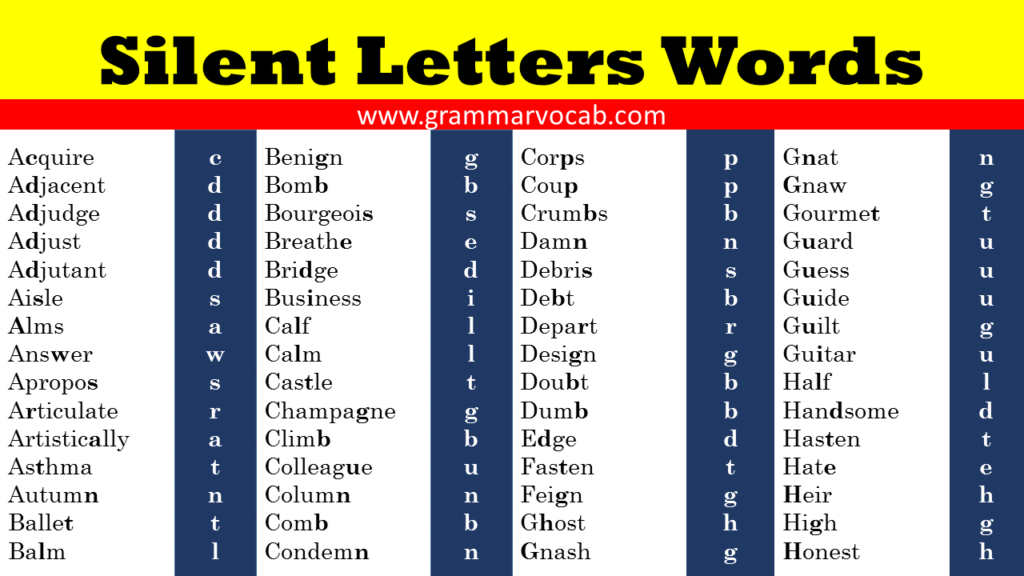 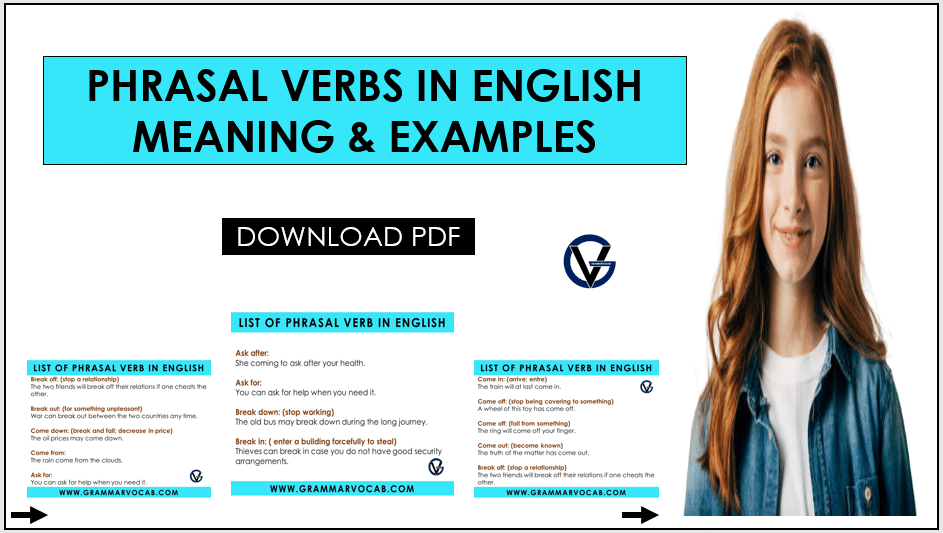 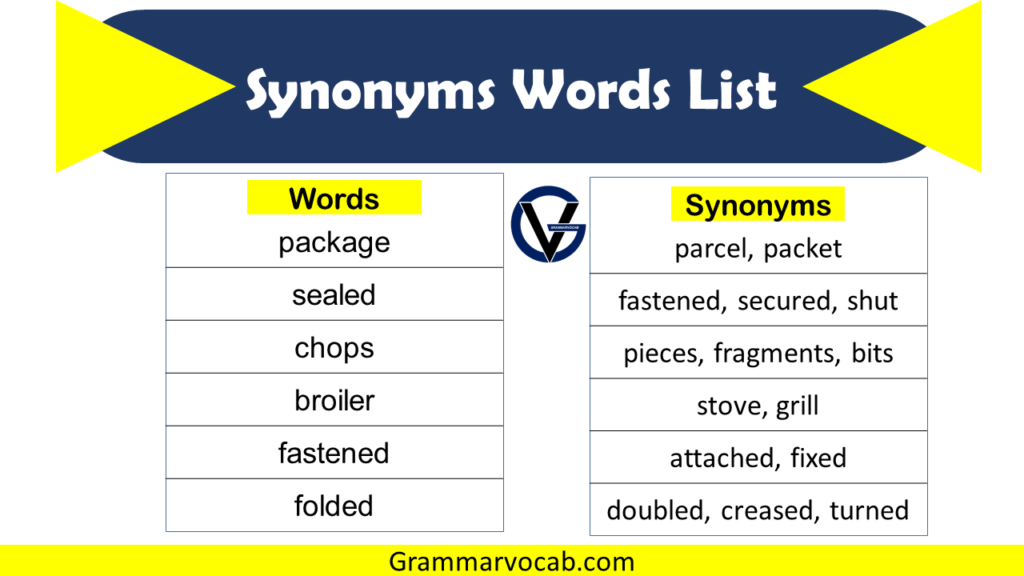