PARTS OF SPEECH IN ENGLISH!

Definition of Parts of Speech

Every word used in a sentence occupied a position and fulfills a function. The words in a sentence are, therefore, divided into causes, called parts of speech, according to the function they fulfill. Parts of speech play an important role in sentence structure. 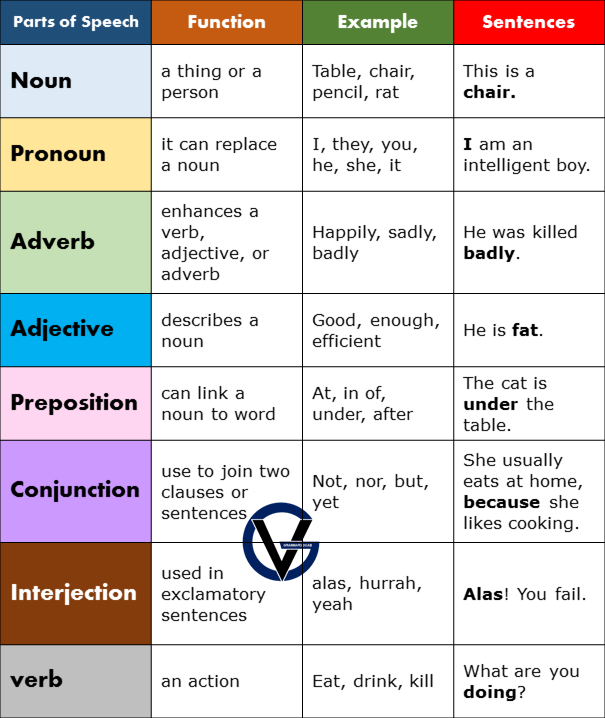 This article will explain to you 8 parts of speech and how to use them in sentences.

There are eight parts of speech.

A noun is used to name people, places, objects, or ideas.

A pronoun is used in place of a noun.

An adjective is used to describe or qualify a noun.

A verb is used to describe an action.

He goes to the office every day.

She will not tell a lie.

I have done my duty.

An adverb is used to qualify a verb by telling us how, why, when, or where the actions take place. It is also used to add to the meaning of an adjective, adverb, a preposition, or conjunction.

He was walking quickly.

I am going now.

He is a brilliant young lady.

He singled the moment he saw the car.

The concert was held at the Bukhari Auditorium.

Note: There are three kinds of adverbs.

In a sentence, they are normally used in the order given above.

Note: When a sentence has a verb of movement, the adverb of place comes immediately after the verb. Example: He went to Hawaii by Air yesterday.

A preposition is used to show the relation of one thing to another. It is a word placed before a noun or a pronoun to show in what relation the person or thing denoted by it stands in relation to something else.

We went about the world.

We take tea in the afternoon.

The Eaglets won with ease.

It is a book of great value.

For one enemy he has a hundred friends.

From what I know of him, I hesitate to trust him.

A conjunction is used to join single words or groups of words to one another.

He could not jump the wall, though he tried again and again.

He squandered all his wealth after the death of his father.

He and his family left for Murree yesterday.

Note: And, but, or, nor, because, since, till, until, after, for, though all are conjunction.

An interjection is used to express some sudden rush of feeling or excitement.

Bravo my son, you have done an excellent job of work.

Alas! we have lost the match.

NOTE: words perform various functions in a sentence. When one word is performing one function, it is one part of speech; when it is doing another, it is another part of speech.

Parts of Speech in English Table

Parts of speech in English Infographics 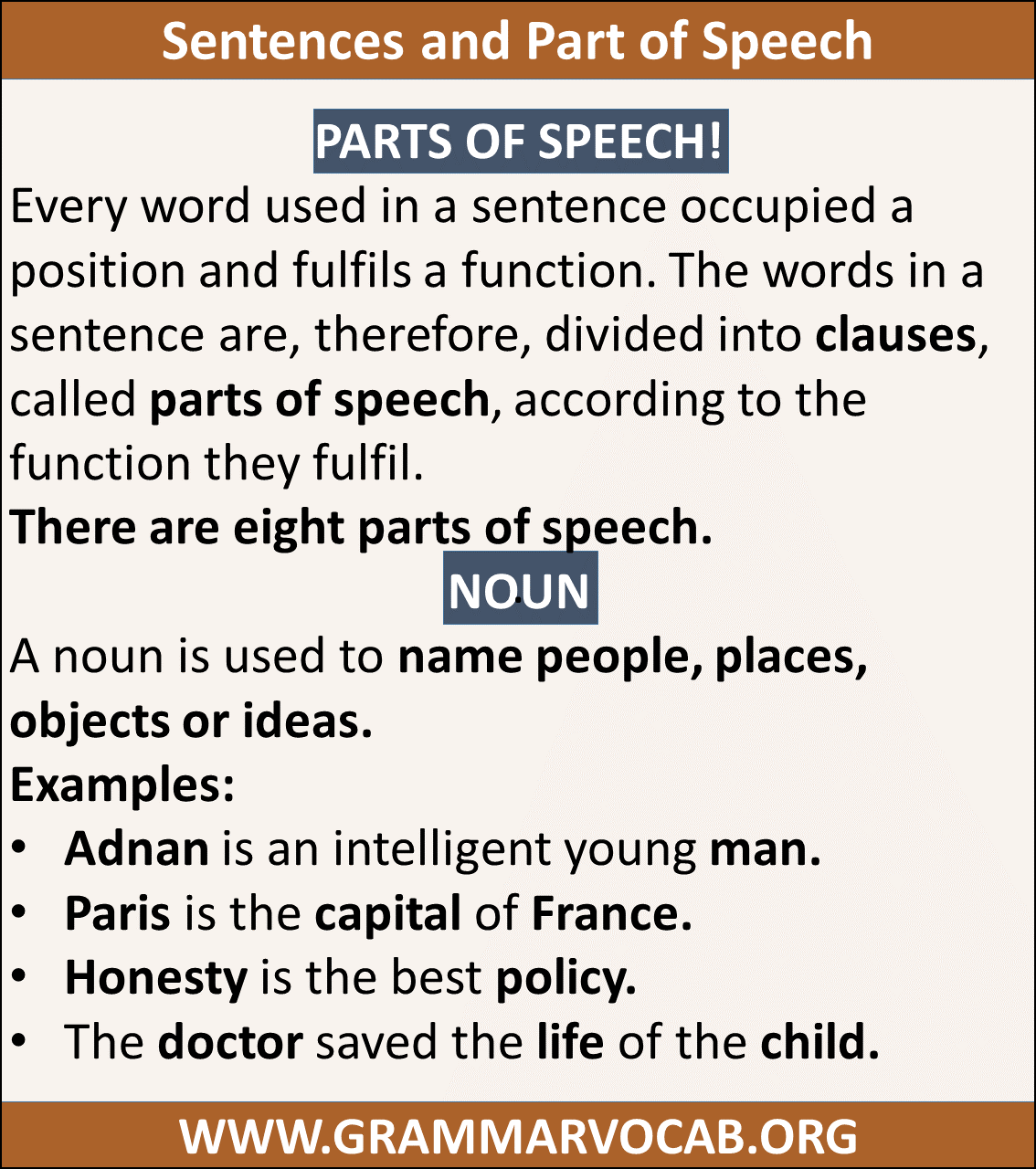 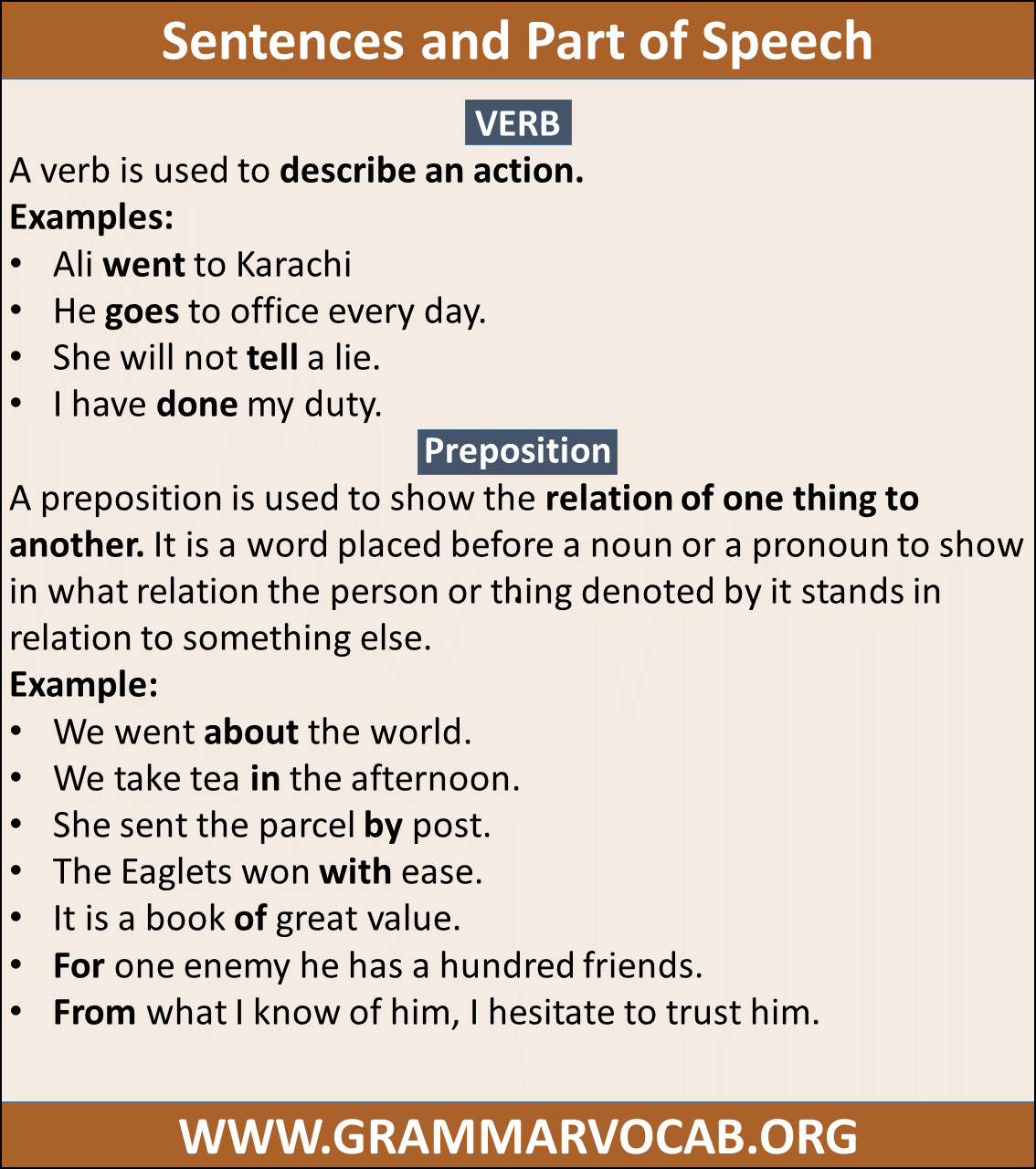 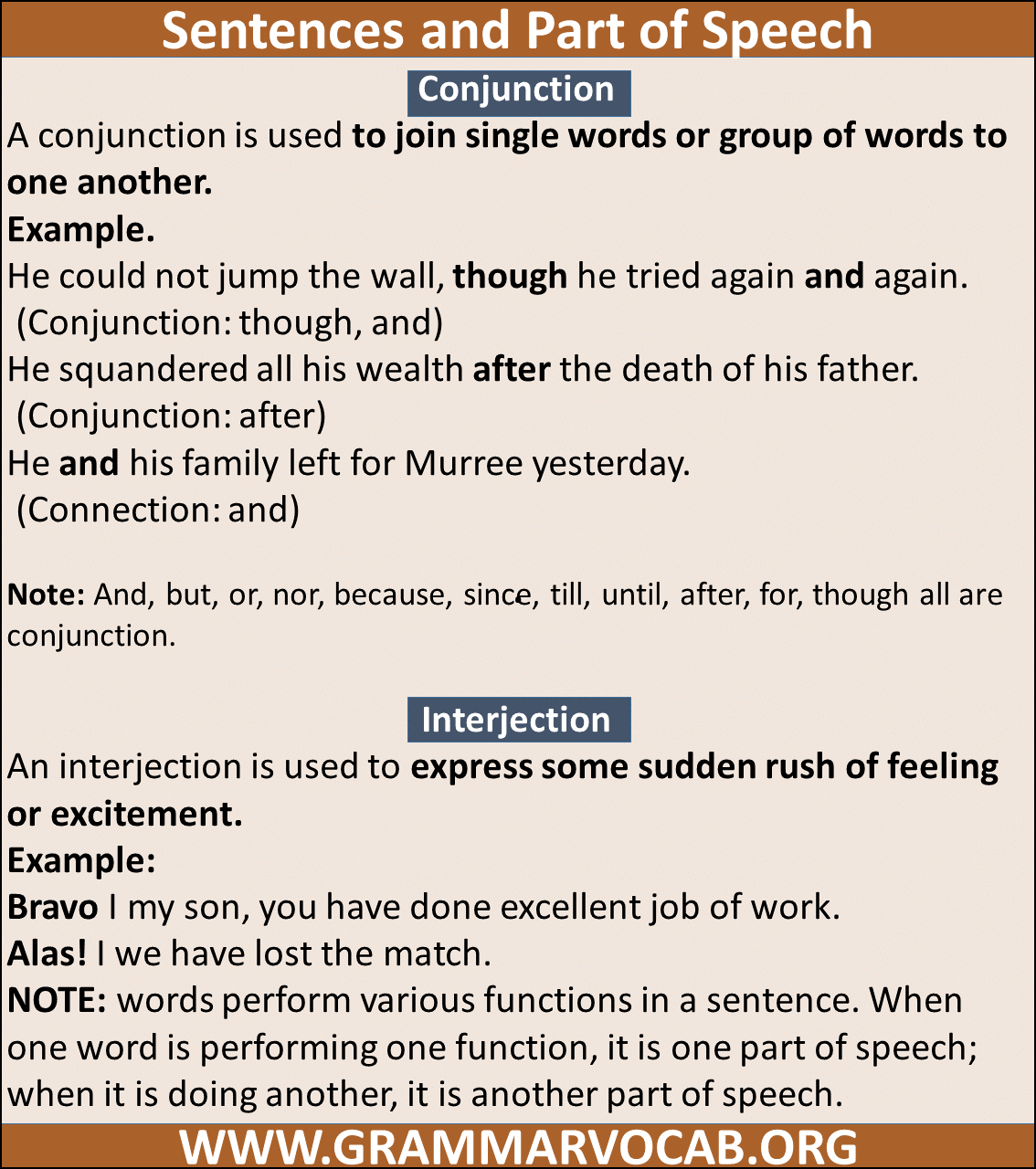 parts of speech in English Pdf 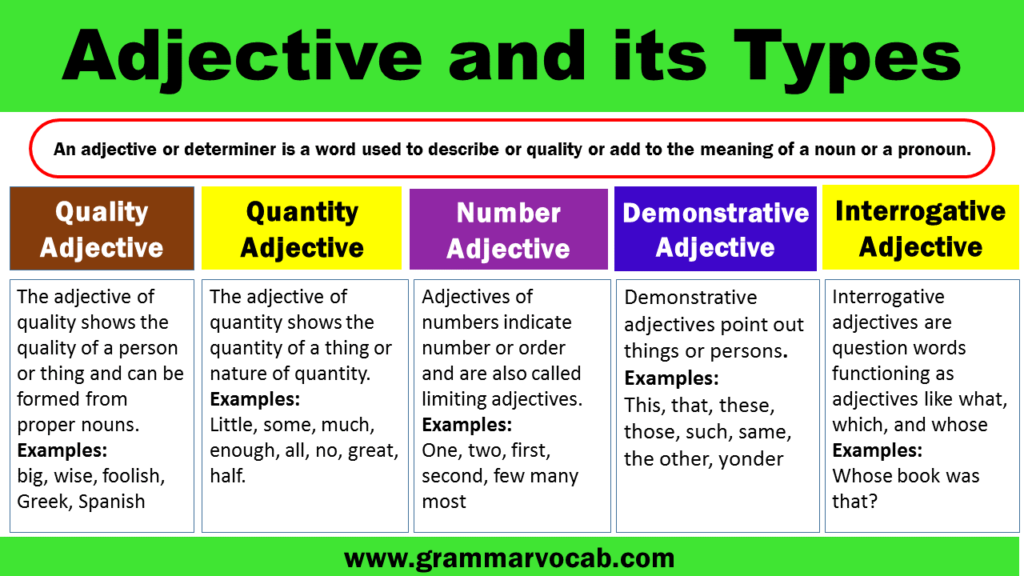 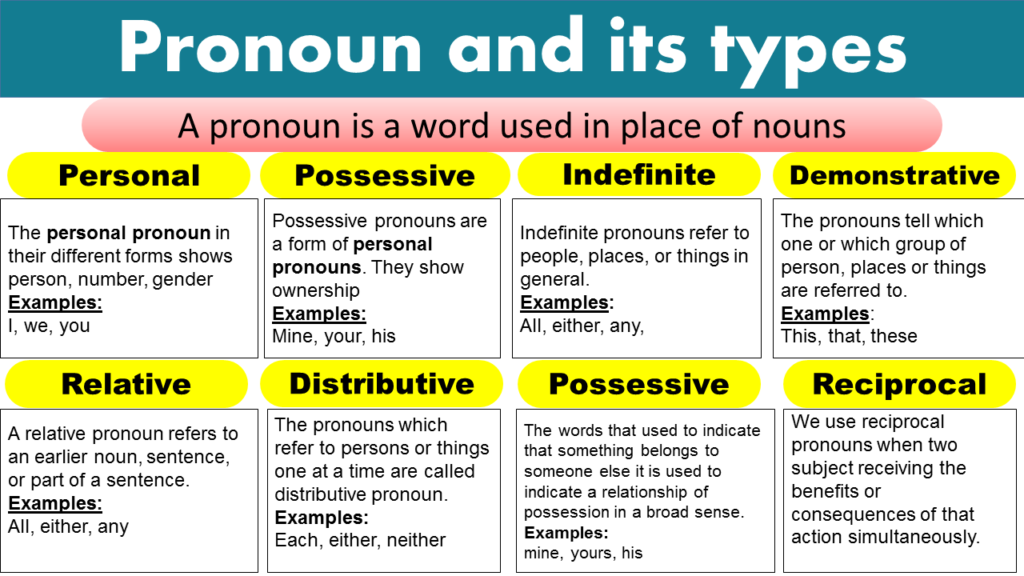 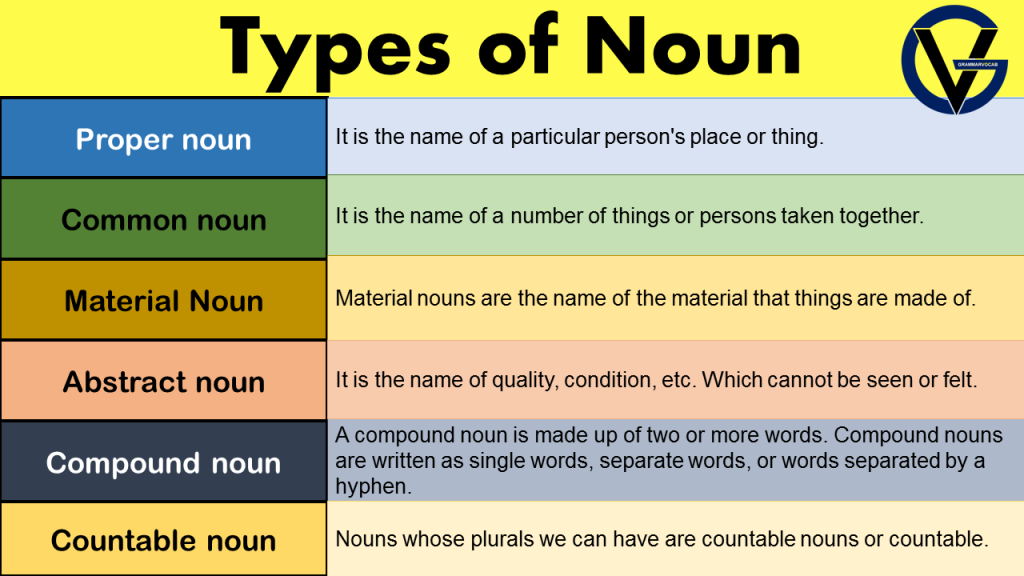 2 thoughts on “Parts of speech in English”